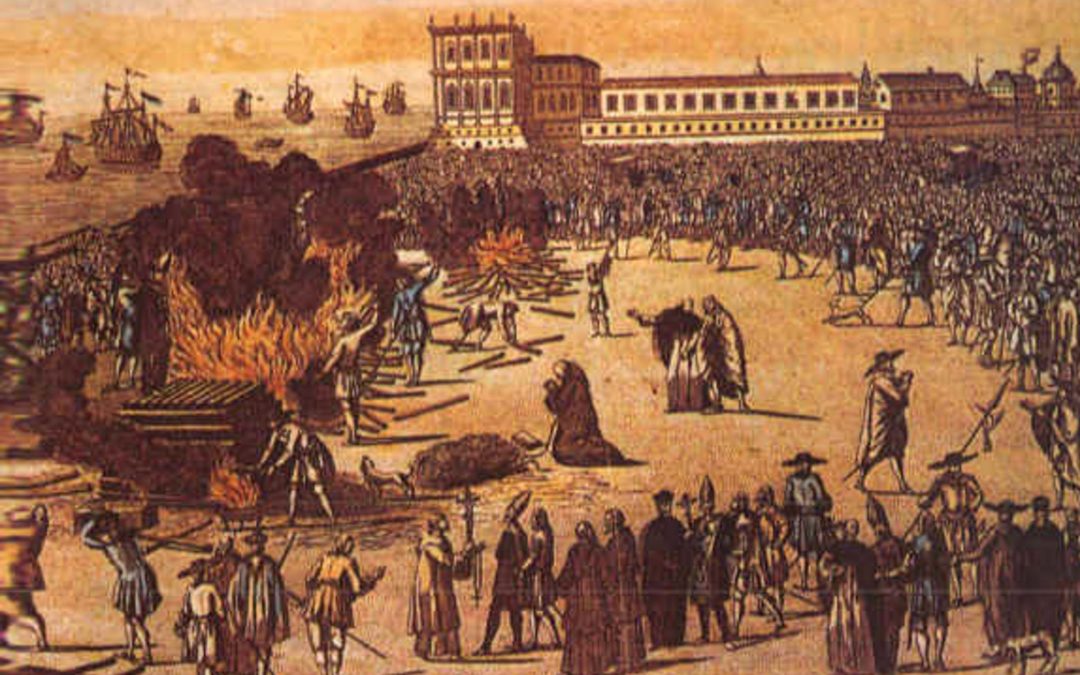 Nineteen times between 1541 and 1739, Jews were burned in Lisbon as part of an auto-de-fe. An auto-da-fé (from Portuguese auto da fé [ˈaw.tu dɐ ˈfɛ], meaning ‘act of faith’) was the ritual of public penance carried out between the 15th and 19th centuries of condemned heretics and apostates imposed by the Spanish, Portuguese, or Mexican Inquisition as punishment and enforced by civil authorities. Its most extreme form was death by burning.

Such events convinced Jews who wished to remain faithful to Jewish customs, traditions and law, that false conversions, sincere conversions and escape were the only paths to safety for them and their offspring. One option was to make one’s way to far off areas of the empire, to such places as St. Augustine, Florida! 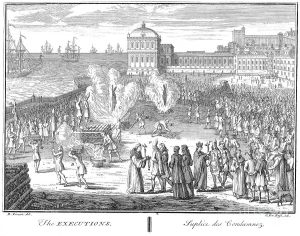 The largest auto-da-fe in Lisbon was held on this day, May 10 in 1682 by the Holy Office of the Inquistion in the Palace Ground of the Portuguese capital city.

The Inquisition held its first Auto da fé in Portugal in 1540. Like the Spanish Inquisition, it concentrated its efforts on rooting out converts from other faiths (overwhelmingly Judaism) who did not adhere to the strictures of Catholic orthodoxy; like in Spain, the Portuguese inquisitors mostly targeted the Jewish New Christians, conversos, or marranos. The Portuguese Inquisition expanded its scope of operations from Portugal to the Portuguese Empire, including Brazil, Cape Verde, and India. According to Henry Charles Lea between 1540 and 1794 tribunals in Lisbon, Porto, Coimbra and Évora burned 1,175 persons, another 633 were burned in effigy and 29,590 were penanced. The Portuguese inquisition was extinguished in 1821 by the “General Extraordinary and Constituent Courts of the Portuguese Nation”. 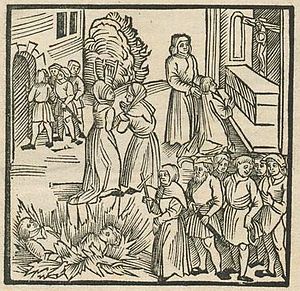 Thousands of Portuguese Jews, the vast majority, would eventually emigrate to Amsterdam, Thessaloniki, Constantinople (Istanbul), France, Morocco, Brazil, Curaçao and the Antilles. In some of these places their presence can still be witnessed, as in the use of the Ladino language by some Jewish communities in Turkey, the Portuguese based dialects of the Netherlands Antilles, or the multiple synagogues built by what was to be known as the Spanish and Portuguese Jews (such as the Amsterdam Esnoga).