Marking 630 Years after the Massacre of the Jews of Barcelona

In 1391, during the great persecutions which began at Seville and spread over all Jewish communities of Spain, the community of Barcelona was destroyed. Three days after the massacre at Palma in Majorca, on Saturday, August 5, 1391, on the feast of San Dominic, two vessels containing fifty Castilians landed at Barcelona. As if by appointment, those who landed rushed, with the native sailors, laborers, peasants, and women, into the Calle Mayor, the principal street of the juderia, and murdered and plundered indiscriminately the entire night long and all of the following day. In the first assault, a hundred Jews lost their lives; the rest fled to the Castello Nuevo, which, with the juderia, was manned by troops by order of the governor. Several of the Castilians were imprisoned; and the city council acquiesced in the suggestion of the governor and the most prominent citizens to have them forthwith executed as ringleaders. The enraged citizens angrily protested against this decision, and attacked the governor and the members of the council. One of the latter was killed, and several others seriously injured. The infuriated mob forced an entrance into the prison and freed the condemned. The castle was taken by storm; all Jews that had not left it—about three hundred in number—were killed. Many committed suicide, many threw themselves from the wall or lost their lives in frenzied combat with their assailants. A great number—though not eleven thousand as Grätz has it (“Geschder Juden,” viii. 68)—accepted baptism as salvation (“Revue Etudes Juives,” iv. 57 et seq.). 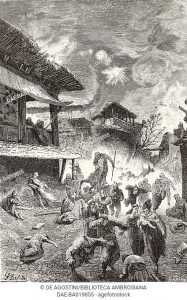 At first the king of Aragon decided, by a decree dated Sept. 10, 1392, to abolish the Jewish community of Barcelona forever. Considering, however, what advantages had accrued to trade through the Jews, and what great services they had rendered the state, he publicly announced, on Oct. 2 (only two weeks later), that it was his wish to establish a new aljama there, and to grant it the same privileges that the former one had possessed. He promised to the new settlers possession of the Calle de Sanahuja, in the neighborhood of the Castello Nuevo, with all the houses as residences. He also promised them, for the holding of services, the synagogue already existing there (perhaps the one built by Bonafos Solomon), and likewise the use of Monjuich as a cemetery for the burial of their dead. They were to be freed, for three years, from all direct and indirect taxes; and to be protected from molestation by the government and the authorities for five years.

No amount of promises, however, could induce the Jews to settle again at Barcelona. At the request of some converts, and by permission of the king, a church to the Holy Trinity was erected on the site of the above-mentioned synagogue.

In 1392, there were no longer any Jews or synagogues at Barcelona. On Dec. 26, 1424, Don Alfonso V. granted to the city of Barcelona the privilege that a Jewish community should never again be established there, and that no Jews were ever to settle there again. All Jews that were still in the city were either to leave it within sixty days or to become converts. But a Jew might stop at Barcelona provided he lived in a public hotel and wore the Jew-badge. The time of his stay was limited to fourteen days, after which term he had to leave the city, and, according to the decrees of Feb. 12, 1479, and of Aug. 10, 1480, he was not permitted to return to the city for two months, and then only for fourteen days.

At present there are in Barcelona a number of Jews from France, Germany, and America, who, however, have not formed a community, and who do not possess a house of prayer.