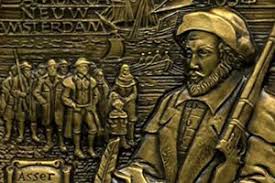 On September 7, 1654, 89 years after the descendants of Jews arrived in St. Augustine, Florida,  a group of 23 Jews from Recife, Brazil arrived in New Amsterdam.  They became the pioneers of the American Jewish community. They arrived on a French frigate called the St. Catherine. Their unofficial leader was Asser Levy. Governor Peter Stuyvesant did want the Jews to remain. Eventually they were allowed to stay with the stipulations that “The poor among them shall not become a burden to the community, but be supported by their own nation.” This statement would find fulfillment in a variety of Jewish immigrant aid societies and other such philanthropic endeavors.

On July 8, 1654, Jacob Barsimson left Holland and arrived aboard Peartree on August 22 in the port of New Amsterdam (in Lower Manhattan, where Wall Street is today). Barsimson was employed by the Dutch East India Company and had fled the Portuguese settlements in the New World, who had captured a formerly Dutch settlement and established the Portuguese Inquisition there.

The first group of Jews in the northern colonies disembarked in early September 1654, shortly after Barsimson. Barsimson is said to have met them at The Battery upon their arrival. This group was made up of twenty-three Portuguese Jews from the Netherlands (four couples, two widows, and thirteen children). Like Barsimson, they had fled from a former Dutch settlement; the group had emigrated from Dutch Brazil after the settlement was conquered by the Portuguese. Fearing the Inquisition, the Jews left Recife. They originally docked in Spanish Jamaica and Spanish Cuba, but the Spanish did not allow them to remain there. Their ship, Ste. Catherine, went to New Amsterdam instead, settling against the wishes of local merchants and the local Dutch Reformed Church. Colonial governor Peter Stuyvesant, upon complaint from these groups, attempted to have the Jews expelled. He wrote a letter to the directors of the Dutch West India Company dated September 22, 1654:

The Jews who have arrived would nearly all like to remain here, but learning that they (with their customary usury and deceitful trading with the Christians) were very repugnant to the inferior magistrates, as also to the people having the most affection for you; the Deaconry also fearing that owing to their present indigence they might become a charge in the coming winter, we have, for the benefit of this weak and newly developing place and the land in general, deemed it useful to require them in a friendly way to depart, praying also most seriously in this connection, for ourselves as also for the general community of your worships, that the deceitful race—such hateful enemies and blasphemers of the name of Christ—be not allowed to further infect and trouble this new colony to the detraction of your worships and the dissatisfaction of your worships’ most affectionate subjects.

However, among the directors of the Dutch West India Company included several influential Jews, who interceded on the refugees’ behalf. Company officials rebuffed Stuyvesant and ordered him in a letter dated April 26, 1655, to let the Jews remain in New Amsterdam, “provided the poor among them shall not become a burden to the company or to the community, but be supported by their own nation”:

We would have liked to effectuate and fulfill your wishes and request that the new territories should no more be allowed to be infected by people of the Jewish nation, for we foresee therefrom the same difficulties which you fear, but after having further weighed and considered the matter, we observe that this would be somewhat unreasonable and unfair, especially because of the considerable loss sustained by this nation, with others, in the taking of Brazil, as also because of the large amount of capital which they still have invested in the shares of this company. Therefore after many deliberations we have finally decided and resolved to apostille [annotate] upon a certain petition presented by said Portuguese Jews that these people may travel and trade to and in New Netherland and live and remain there, provided the poor among them shall not become a burden to the company or to the community, but be supported by their own nation. You will now govern yourself accordingly.

Upon the capture of the colony by the English in 1664, the rights enjoyed by the Jews were not interfered with, and for twenty years they appear to have lived much as before the British occupation, though with slight increase in their numbers. Jews had previously been barred from settling in English colonies, as they had been banned from all English lands for 400 years. Oliver Cromwell (British Protector from 1649 through 1660, through his son Richard) lifted this prohibition, and founding of the first major Jewish settlement soon followed in Newport, Rhode Island. In 1672, Rabba Couty attained prominence by his appeal to the King’s Council in England from a decree passed against him by the courts of Jamaica, as a result of which one of his ships had been seized and declared forfeited. His appeal was successful and established the rights of Jews as British subjects. This appears to be the first case in which a colonial grant of naturalization was recognized as valid.