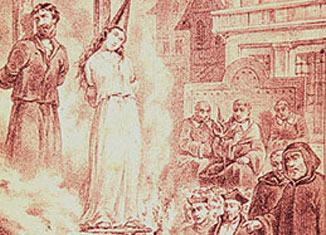 On April 11, 1649, 372 years ago and 84 years after the founding of St. Augustine, Florida, Tomas Trevino de Sobremonte was burned to death at the stake in Mexico City, a victim of the Inquisition. His crime: observing the “dead law of Moses” and its rites and ceremonies. In other words, while ostensibly living as a “New Christian” convert to Catholicism, Tomas continued secretly to practice the religion and observe the rituals and customs of Judaism. The priest accompanying Trevino to his death testified that in his final hours Trevino asserted that “he was a Jew and that he was resolved to live and die in the Law of Moses.” Because he would not recant, he was denied the mercy of a quick death before the fire was lit and, instead, Trevino suffered a slow, agonizing death in the flames.

Trevino was one of many “conversos,” “secret” or “crypto-Jews” arrested and tried by the Holy Office of the Inquisition in the Spanish and Portuguese colonies in the New World, which then comprised almost all of Latin and South America. While it had functioned for centuries in Europe, the Inquisition arrived in the New World in the wake of the conquistadors in the mid-sixteenth century and continued to operate until the late 1700’s. Its purpose was to detect and stamp out heresy. These were years of intense upheaval and civil and international strife in Western Europe arising from the Protestant Reformation and the Roman Catholic Counter-Reformation. European sovereigns expected their subjects to adhere loyally to their own their own, state-sponsored religions. Modern principles of separation of church and state and of religious toleration found few adherents. In the 1490’s, Spain expelled all Jews, Moslems and other non-Catholics who would not convert to Catholicism and officially banned from her American colonies anyone who could not prove descent from generations of loyal, practicing Catholics. Nonetheless, over the years, many Spanish Jews — like Tomas Trevino de Sobramonte– managed to evade the restrictions and flee to start new lives in the Americas.

Trevino was born in Spain in 1592. His Jewish mother, though technically a “New Catholic” convert, continued secretly to observe and taught her children the rituals and ceremonies of Judaism. Trevino fled to Mexico in New Spain in 1611, when the Inquisition began to ferret out secretly practicing Jews in his village. He left just in time. His family shortly thereafter came under suspicion and, in 1623, his mother and elder brother were executed after a trial by an Inquisition board.

In New Spain, Trevino lived in several communities and became a successful merchant. He first ran afoul of the Mexican Inquisition in 1624. At his trial he confessed to roguish activities, including illicit relations with a number of women, and admitted that his mother had taught him Jewish prayers and rituals as a child, but swore that all that was behind him. He managed to convince the tribunal that as an adult he had not strayed from the teachings of the Catholic Church, which he willingly embraced and wanted only to continue to live in Mexico as a loyal Spanish subject. Nonetheless, Trevino’s property was confiscated, he was fined and ordered to perform various religious penances. After a relatively brief imprisonment, the tribunal declared Trevino rehabilitated and released him.

Shortly thereafter, in 1629, Trevino married the pious daughter of an avowedly Jewish family who had never converted and who were living in Mexico in hopes that the Inquisition would be more lax there. For the next several years, Trevino and his wife lived in Guadalajara as Jewishly observant as conditions allowed. Though he and his wife continued to attend Mass and took a number of other precautions to avoid arousing suspicious, Trevino raised his children as Jews, circumcised his son, fasted religiously, observed the dietary laws and other rituals and ceremonies. Over the next several years, Trevino emerged as the recognized leader of the more, observant “orthodox” segment of Mexico’s bravely Jewish community.