On this day, May 26, 1135, Alfonso VII of León and Castile was crowned in the Cathedral of Leon as Imperator totius Hispaniae, “Emperor of all of Spain” 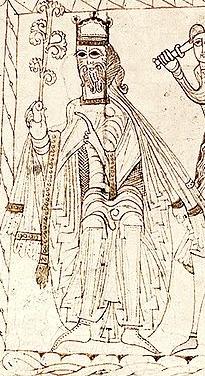 On May 26, 1135:  Alfonso VII of León and Castile was crowned in the Cathedral of Leon as Imperator totius Hispaniae, “Emperor of all of Spain”. At the start of his reign he curtailed “the rights and liberties which his father had granted the Jews. He ordered that neither a Jew nor a convert might exercise legal authority over Christians, and he held the Jews responsible for the collection of the royal taxes.” After a few years, he adopted a more positive policy towards his Jewish subject. It was laws such as these that remained for centuries, driving Jews out of Spain to distant lands, even to far off places such as St. Augustine, Florida in 1565!

On the other hand, Alfonso VII restored the rights granted by his father and then granted new ones including the granting of a special fuero (charter) in 1136 that permitted the Jews of Guadalajara to outfit themselves like the Christian Knights of his kingdom. Judah ben Joseph ibn Ezra (Nasi) was one of the King’s most influential advisors.  After the conquest of Calatrava in 1147, the king placed Judah in command of the fortress, later making him his court chamberlain. The king held Judah ben Joseph stood in such high esteem that he granted Judah’s request to let the Jews who had fled from the Almohades to settle in Toledo.  The reigns of Alfonso and his father are proof that Jews prospered, and suffered, under both Catholic and Moslem rule, depending upon the ruler and the time period.

Alfonso VII (1 March 1105 – 21 August 1157), called the Emperor (el Emperador), became the King of Galicia in 1111 and King of León and Castile in 1126. Alfonso, born Alfonso Raimúndez, first used the title Emperor of All Spain, alongside his mother Urraca, once she vested him with the direct rule of Toledo in 1116. Alfonso later held another investiture in 1135 in a grand ceremony reasserting his claims to the imperial title. He was the son of Urraca of León and Raymond of Burgundy, the first of the House of Ivrea to rule in the Iberian peninsula.

Alfonso was a dignified and somewhat enigmatic figure. His rule was characterised by the renewed supremacy of the western kingdoms of Christian Iberia over the eastern (Navarre and Aragón) after the reign of Alfonso the Battler. Though he sought to make the imperial title meaningful in practice to both Christian and Muslim populations, his hegemonic intentions never saw fruition. During his tenure, Portugal became de facto independent, in 1128, and was recognized as de jure independent, in 1143. He was a patron of poets, including, probably, the troubadour Marcabru.

In 1111, Diego Gelmírez, Bishop of Compostela and the count of Traba, crowned and anointed Alfonso King of Galicia in the cathedral of Santiago de Compostela. He was a child, but his mother had (1109) succeeded to the united throne of León-Castile-Galicia and desired to assure her son’s prospects and groom him for his eventual succession. By 1125 he had inherited the formerly Muslim Kingdom of Toledo. On 10 March 1126, after the death of his mother, he was crowned in León and immediately began the recovery of the Kingdom of Castile, which was then under the domination of Alfonso the Battler. By the Peace of Támara of 1127, the Battler recognised Alfonso VII of Castile. The territory in the far east of his dominion, however, had gained much independence during the rule of his mother and experienced many rebellions. After his recognition in Castile, Alfonso fought to curb the autonomy of the local barons.

When Alfonso the Battler, King of Navarre and Aragón, died without descendants in 1134, he willed his kingdom to the Knights Templar and the Knights Hospitaller. The aristocracy of both kingdoms rejected this. García Ramírez, Count of Monzón was elected in Navarre while Alfonso pretended to the throne of Aragón. The nobles chose another candidate in the dead king’s brother, Ramiro II. Alfonso responded by reclaiming La Rioja and “attempted to annex the district around Zaragoza and Tarazona”.

In several skirmishes, he defeated the joint Navarro-Aragonese army and put the kingdoms to vassalage. He had the strong support of the lords north of the Pyrenees, who held lands as far as the River Rhône. In the end, however, the combined forces of the Navarre and Aragón were too much for his control. At this time, he helped Ramon Berenguer III, Count of Barcelona, in his wars with the other Catalan counties to unite the old Marca Hispanica.

A vague tradition had always assigned the title of emperor to the sovereign who held León. Sancho the Great considered the city the imperiale culmen and minted coins with the inscription Imperator totius Hispaniae after being crowned in it. Such a sovereign was considered the most direct representative of the Visigothic kings, who had been themselves the representatives of the Roman Empire. But though appearing in charters, and claimed by Alfonso VI of León and Alfonso the Battler, the title had been little more than a flourish of rhetoric.

13th-century miniature of Alfonso VII of León from the codex Tumbo A. Santiago de Compostela Cathedral

On 26 May 1135, Alfonso was crowned “Emperor of Spain” in the Cathedral of León. By this, he probably wished to assert his authority over the entire peninsula and his absolute leadership of the Reconquista. He appears to have striven for the formation of a national unity which Spain had never possessed since the fall of the Visigothic kingdom. The elements he had to deal with could not be welded together. The weakness of Aragon enabled him to make his superiority effective. After Afonso Henriques recognised him as liege in 1137, Alfonso VII lost the Battle of Valdevez in 1141 thereby affirming Portugal’s independence in the Treaty of Zamora (1143). In 1143, he himself recognised this status quo and consented to the marriage of Petronila of Aragon with Ramon Berenguer IV, a union which combined Aragon and Catalonia into the Crown of Aragon.