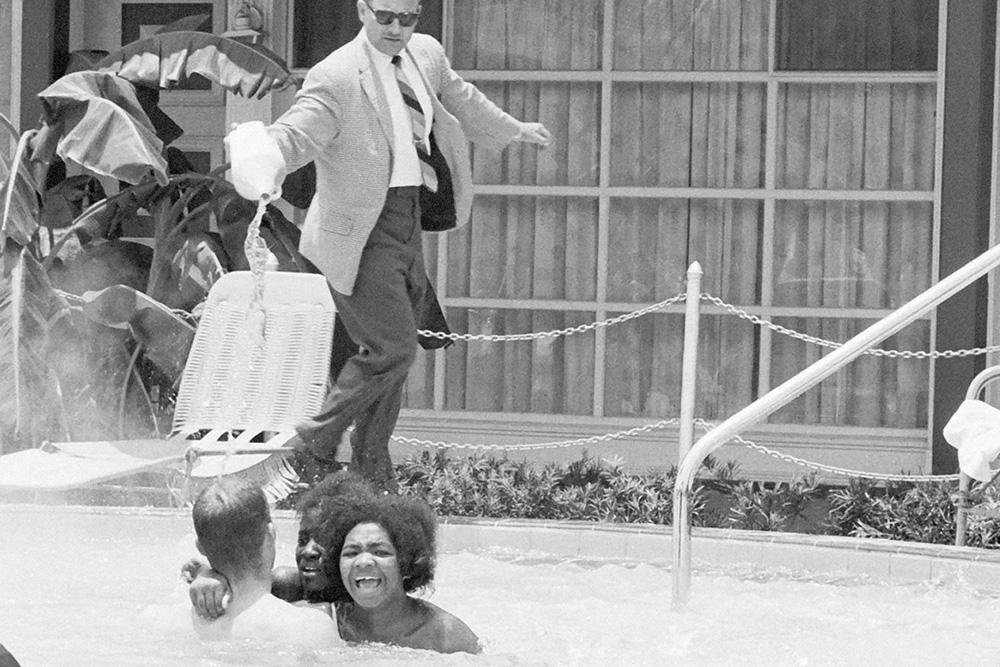 How exactly did a black girl like the heroic Mimi Jones, of Albany, Georgia, get close enough to the swimming pool at the Monson Hotel that fateful day, Thursday, June 18, 1964, to jump in and have her photo taken while the Monson’s owner, Jimmy Brock poured muriatic acid into the pool?

It was quite a challenge and took a bit of coordination. While 17 year old Ms. Jones, who died this past July 26th, was preparing to approach the pool, sixteen Rabbis and an administrator of the Central Conference of American Rabbis who came to St. Augustine at the request of Reverend Dr. Martin Luther King, Jr. walked arm-in-arm, each with a black teenager to the doorway of the Monson Hotel’s lunch counter seeking entrance.

The ruckus that ensued grabbed a lot of attention allowing Ms. Jones, to jump into the pool and led to a press photo that hit the wire services and was seen all over the world. The response to the photo of Ms. Jones in the pool and of Jimmy Brock pouring muriatic acid into the pool, led to the a successful cloture vote in the U.S. Senate, ending the 54 day-old filibuster of the Civil Rights Act of 1964.

While Ms. Jones was still in the pool, the Rabbis were taken into custody as part of the largest mass arrest of Rabbis in U.S. History. Spending the night in the St. Johns County Jail, they penned a letter, proclaiming that “We came because we realized that injustice in St. Augustine, as anywhere else, diminishes the humanity of each of us.”

The St. Augustine Jewish Historical has become the guardian of the memory of the events of June 18t-19, 1964. It is an important piece of the fabric of the relationship of the Jewish community to the Civil Rights Movement.