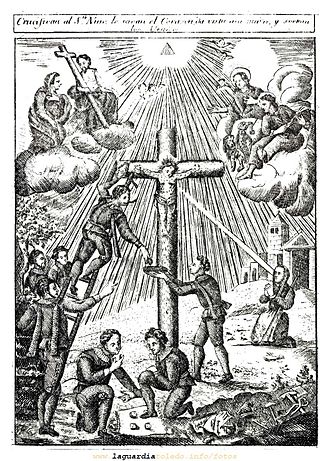 Historians of the Jewish presence in Colonial St. Augustine, Florida should know about the “Holy Child of LaGuardia.” It was on this day, October 12, 1491 that the two Jews accused of murdering a child in the town of LaGuardia, Spain, were brought face to face to mount a case as to why the other was guilty.

The Seven Part Code of Castille established in 1265 mentions:

And because we have heard it said that in some places Jews celebrated, and still celebrate Good Friday, which commemorates the Passion of Our Lord Jesus Christ, by way of contempt: stealing children and fastening them to crosses, and making images of wax and crucifying them, when they cannot obtain children; we order that, hereafter, if in any part of our dominions anything like this is done, and can be proved, all persons who were present when the act was committed shall be seized, arrested and brought before the king; and after the king ascertains that they are guilty, he shall cause them to be put to death in a disgraceful manner, no matter how many there may be. (Alfonso X the Wise, Partidas, VII, XXIV, Law 2)

The Holy Child of La Guardia (Spanish: El Santo Niño de La Guardia) is a folk saint in Spanish Roman Catholicism and the subject of a medieval blood libel in the town of La Guardia in the central Spanish province of Toledo (Castile–La Mancha).

On November 16, 1491, an auto-da-fé was held outside of Ávila that ended in the public execution of several Jews and conversos. The suspects had confessed under torture to murdering a child. Among the executed were Benito García, the converso who initially confessed to the murder. However, no body was ever found and there is no evidence that a child disappeared or was killed; because of contradictory confessions, the court had trouble coherently depicting how events possibly took place.The child’s very existence is also disputed.

Like Pedro de Arbués, the Holy Infant was quickly made into a saint by popular acclaim, and his death greatly assisted the Spanish Inquisition and its Inquisitor General, Tomás de Torquemada, in their campaign against heresy and crypto-Judaism. The cult of the Holy Infant is still celebrated in La Guardia.

The Holy Child has been called Spain’s “the most infamous case of blood libel”. The incident took place one year before the expulsion of the Jews from Spain, and the Holy Child was possibly used as a pretext for the expulsion.

As of 2016, the Archdiocese of Madrid’s official website still maintained that the alleged events actually took place. An American historian, William Thomas Walsh, defended the validity of the charge, against the research of Henry Charles Lea, who had earlier claimed it to be a fraudulent prosecution.

Certainly several similar episodes had occurred in Spain. One of the most well known was the supposed crucifixion of the boy Saint Domingo of Val in Zaragosa in the 13th century and also the boy of Sepúlveda in 1468. This last incident resulted not only in the execution of sixteen Jews found guilty of the crime but also resulted in a popular assault on the Jewish community (Aljama) in Sepúlveda, which claimed more victims.

England, among other European countries, was not without its own blood libel legends as can be seen from the legend of Little Saint Hugh of Lincoln.

There is no evidence that the murders or related crimes took place. The accusations and consequent punishments of those accused are understood to be examples of anti-Semitism.

Accusation and trial
Until 1887 the story was known through the legend and in the trial papers deposited in the National Archives of Spain. In that year, the Spanish historian Fidel Fita published an account of the trial of Yucef Franco, one of the accused, in the Boletin de la Real Academia de la Historia, from the trial papers he had discovered in the Archive. It is one of the most complete accounts of a Spanish Inquisition trial extant.

In June 1490, a roving cloth carder, a converso named Benito García, aged 60, a native of the town of La Guardia, was stopped in Astorga in the province of León. A consecrated Host was discovered in his knapsack. He was taken for interrogation before the Vicar-general (Judicial Judge) of the Bishopric of Astorga, Pedro de Villada. The confession of Benito García, dated June 6, 1490, has survived and indicates that he was only accused of Judaizing. The defendant explained that five years earlier (1485) he had secretly returned to the Jewish faith, encouraged by another converso, Juan de Ocaña, who was also from La Guardia, and a Jew from the nearby locality of Tembleque, named Franco.

A Jewish cobbler, Yucef Franco, aged 20, from Tembleque was also mentioned by Benito García and then arrested by the Inquisition on July 1, 1490, along with his father Ça Franco, aged 80. He was in prison in Segovia on July 19, 1490, when he fell ill. He was visited by a doctor, Antonio de Ávila. Yucef asked the doctor if he could see a Rabbi. In place of a Rabbi, on his second visit the doctor was accompanied by a converso Friar, Alonso Enriquez, disguised as a Rabbi and calling himself Abrahán. When asked why he thought he had been arrested, Yucef replied that he was accused of the ritual murder of a Christian boy. The second time he was visited by the two men, Yucef made no further mention of this issue.

Yucef’s subsequent statements implicated other Jews and conversos. On August 27, 1490, the Grand Inquisitor Tomás de Torquemada issued an indictment ordering the transfer of the prisoners from Segovia to Ávila to await trial. The indictment lists all the prisoners held in Segovia who were related to this case. They were conversos: Alonso Franco, Franco Lope, García Franco, Juan Franco, Juan de Ocaña, and García Benito, residents of La Guardia; and Jews: Yucef Franco of Tembleque, and Moses Abenamías of Zamora. The indictment contained charges of heresy, apostasy, as well as crimes against the Catholic faith. Curiously the indictment does not mention Ça Franco.

The inquisitors in charge of preparing the trial were Pedro de Villado (the same man who had previously interrogated Benito García in June 1490), Juan López de Cigales, Inquisitor of Valencia since 1487, and Friar Fenando de Santo Domingo. All were men who enjoyed the confidence of Torquemada. Santo Domingo had also written the foreword to a published anti-Semitic pamphlet.

The trial against Yucef Franco began on December 17, 1490, and lasted several months. He was accused of trying to attract conversos to Judaism as well as having participated in the ritual crucifixion of a Christian child on Good Friday. It seems that before the trial, Benito García and Yucef Franco, at least, had already partially confessed and given evidence against the others on the promise of obtaining their freedom, but this was a trap laid by the Inquisition.

When the indictment was read out, Yucef Franco shouted out that it was the biggest falsehood in the world. He was appointed Counsel for his defence who petitioned the court that the charges were too vague, no dates of the crime were given, there was no body, and that the victim had not even been named. As a Jew, Yucef could not be guilty of heresy or apostasy. The defense asked for complete acquittal. The petition was overruled by the court and the trial proceeded. The preserved confessions of this defendant, extracted under torture, refer at first only to conversations with Benito García in gaol and incriminate them only as Judaizers, but later start to refer to a piece of witchcraft performed about four years earlier (perhaps 1487), which involved the use of a consecrated host, stolen from a church in La Guardia, and the heart of a Christian boy. Yucef’s subsequent statements give more details of this topic and are particularly incriminating of Benito García. García’s statements have also been preserved, and taken “whilst he had been put to the torture” are inconsistent with those of Yucef, and above all serve mainly to incriminate the latter. The inquisitors even arranged a face to face confrontation between the two accused, on October 12, 1491, and the judicial records of this meeting state that their depositions were in agreement, which is surprising, as previously they had contradicted each other.

In October 1491, one of the inquisitors, Friar Fernando de San Esteban, travelled to the convent of San Esteban in Salamanca to consult with several legal experts and theologians, who pronounced on the guilt of the accused. In the final phase of the trial, the evidence was made public and Yucef tried unsuccessfully to refute it. The last depositions of Yucef, obtained under torture in November, added more details to the facts; many of them clearly had their origins in anti-Semitic literature

On 16 November 1491, in the Brasero de la Dehesa (lit: “brazier in the meadow”) in Ávila, all of the accused were handed over to the secular authorities and burned at the stake. Nine people were executed – three Jews: Yusef Franco, Ça Franco, and Moses Abenamías; and six conversos: Alonso, Lope, García and Juan Franco, Juan de Ocaña and Benito García. As was customary, the sentences were read out at the auto-da-fé, and those of Yucef Franco and Benito García have been preserved.

Property confiscated from the prisoners was used to finance the construction of the monastery of Santo Tomás de Ávila, which was completed on August 3, 1493.